In this blog series we look at technology in real estate development and construction. Today we interview Chris Lin (on the right), co-founder of mobile app start-up Pic2Paper.com 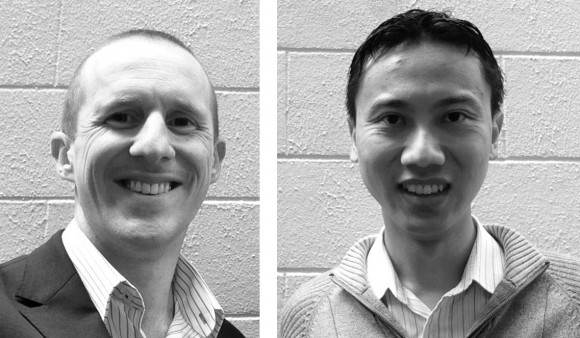 Tell me about your background and what motivates an ambitious property development manager to change lanes into software development?

My Co-Creator, Chris Farhi and I originally became friends during University. Since then, we have worked as professionals in the property industry primarily in development and consulting.

We pursued Pic2Paper because we saw both a need and an opportunity. The journey from the original idea to the App Store has been very exciting.

I look at Pic2Paper and I see what appears to be a solution to a frustration you obviously experienced in your day job. Am I right and what led you to conceive the idea for Pic2Paper?

That’s spot on. Property is physical, so in our professional lives we often take photos, for example during site visits. Pic2Paper provides a quick tool for presenting photos and notes within reports. This enables you to capture and present the critical information from a site visit – photos and notes – using a quick and elegant tool.  This delivers substantial time savings and increased accuracy, which is important for professionals.

While conceived with property in mind, Pic2Paper has a much wide user base across both professional and personal uses.

We were surprised that an App did not already exist for this. Pic2Paper is not mind-blowing from a technical perspective, but it is an elegant tool that solves a very real problem.

You had this idea and then you had to convert it into a marketable product – tell me how your implementation progressed?

Pic2Paper has been a journey for both of us and a major learning curve. It all started with a scribble on a piece of paper that we developed into a working idea. Initially the idea was much more complicated, but over time we simplified it down to its essence and in the process it became relevant to a much wider range of users.

We worked with a local app development firm to finalise the design and programming of the app. The team there were a great young crew with a passion for apps, which made the process really enjoyable. Meanwhile we completed the other collateral ourselves (website, social media, video, etc), which was another learning curve!

The application looks simple to use and based on a basic premise – what do you see as the 3 most important benefits your software provides?

The three key benefits are:

There are some other subtle benefits, like automatic time stamping of photos, which also provides greater information than would otherwise be available from manually created reports.

Who is going to get most value from using Pic2Paper?

Whilst the idea originated from a property background, we believe that anyone who takes photos, particularly for work, can benefit from the app. At the end of the day, being able to caption a photo adds value to the photo.

Perhaps, a modelling agency taking head-shots with a description of name / height of each model, then sent off to a client for consideration. Perhaps, a botanical scientist who wishes to take time capture photos of the growth of a plant. The user base is extremely wide, and the layout / presentation just wraps everything up in a complete package.

Even in a personal sense, holiday shots with a note about the location, event, scenario etc might be worth recording.

Linkedin is how I found out that you had launched your application – what other marketing channels are you utilizing and where do you think this will end up?

We are primarily using word of mouth, both ‘in person’ and using social media. Using social media, we have already been approached by a number of professional institutes who will be featuring the app in their publications as they see the app as being a valuable tool for their members.

Chris, it was great talking to you. One last question – in retrospect these solutions seem obvious, so what’s next on your radar?

Thanks for your time also Andrew. We have one or two other ideas floating around, which admittedly I won’t disclose! At this stage Pic2Paper is our focus, and with a global playing field we’ll just have to see how it all pans out. We are also looking to gear up for Pic2Paper’s release on Android. Spread the word!

Sure will – I look forward to the Android version!

Interviewed by Andrew.Crosby@aenspire.com
Andrew founded a start-up software company in 2000 “CollaborIT” specialising in online collaboration for construction and development projects. Since then he has taken an active interest in how to improve the intellectual mechanics and productivity in property development and construction. Andrew has run into the founders of Pic2Paper (Chris and Chris) now for few years at various events and the occasional business dealing.

This entry was posted on Thursday, May 14th, 2015 at 8:16 am and is filed under Uncategorized. You can follow any comments to this entry through the RSS 2.0 feed. Both comments and pings are currently closed.